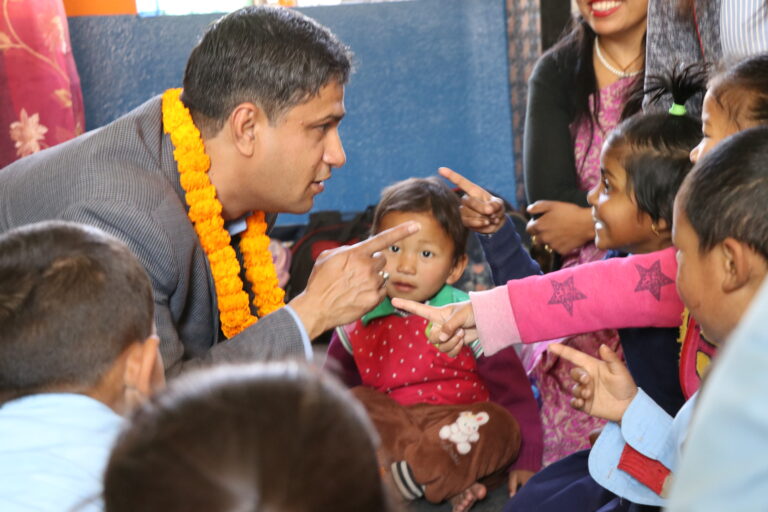 Our very dear Friend Dhirendra Lamsal, passed away January 4, 2022.  We want to honor and remember his great contributions to make the world a better place for children and families in Nepal and around the world—and how important he has been for so long to the World Forum community.  He remains in our thoughts and ideas, our memories, and our hearts.  We share our condolences with his wife Susan Risal and his daughter Anusha. 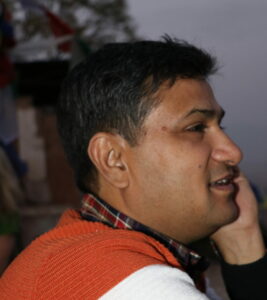 “I worked side-by-side with Dhirendra Lamsal for more than 20 years. He was a ‘force of nature’ and gentle leader while transforming programs for young children throughout Nepal. Just as importantly he attended World Forum Conferences as our superstar who would always take time to discuss his work and new ideas with other early childhood experts from around the world. There is no way that we can replace Dhiraj. However, his memory will keep us moving forward each day as we have been made richer in knowledge and forever supported by Dhirendra’s brilliance.  He was our shining star!”

“Mr. Lamsal, having a dynamic personality, was quite a familiar figure in the domain of children’s sector.  He was born on October 21, 1972 in Dharan, Eastern part of Nepal and spent most of his childhood there. He graduated with bachelor’s degree in English and History from JM College and also had degree in English Language and Literature from Tribhuvan University. He worked in several schools as an English teacher. He then started his work in the non-governmental sector from Women’s Inspiration Community (WICOM). In this organization, he provided training on prevention, care and treatment of HIV/AIDS and Sexually Transmitted Infections (STIs) for 7 years. Later, he worked at Lifesaving and Life-giving Society (LALS) from 1999 to 2004 as a training officer and later led the organization.”

“Once, he also became a consulting coordinator of Central Child Welfare Board (CCWB) for a brief period of 3 months from January to March, 2003. He became Program coordinator of Network for Children Prisoners and Dependents (NCPD), a network of organizations working to address the problems faced by the prisoners, their dependent children and families. While working as the Program coordinator for the Secretariat of the organization, Mr. Lamsal founded International Child Resource Institute in Nepal (ICRI-Nepal) in the year 2004. He was enormously recruited, trained, guided and mentored by Mr. Ken Jaffe (The founder and Global Director of ICRI HQ, CA, USA). So, he had a long lasting impact and influence of Mr. Jaffe which could be sensed in his way of thinking, envisioning and acting. The dispositions he learned then used to be reflected in his each and every step of planning, executing, evaluating and reformulating the programs in Nepal. He has a commendable idea of developing Planning Blueprint as a learning impact of Mr. Jaffe on him.”

“Mr. Lamsal was one of the prominent NGO management experts with multifaceted knowledge of early childhood care and development. He provided leadership to several programs which aim at serving children at risk and their families in Nepal. In the capacity of Country Director of ICRI Nepal, he oversaw ICRI’s work on numerous programs to support children and families in Nepal such as National Center for Learning Resources (NCLR); Network for Children, Prisoners and Dependants (NCPD); Alliance for Corporate Social Responsibility (ACSR); School Girls Education (SGE); and Infants Care Facility Improvement Project (ICFIP) to name the major ones. Through these multifaceted programs, ICRI Nepal has benefitted more than ten thousand children in Nepal. In addition, he used to be involved in writing proposals and carrying out some research in the collaboration of like minded organizations. He was also a member of Global Fund for Children, Nepal and National Child NGO Federation.”

“Mr. Lamsal possessed a broad knowledge and understanding of the conditions of orphaned, displaced and vulnerable children including the national child and family serving policies and systems of Nepal. He was involved in the formulation process of National Plan of Action for Children (2004/05–2014/15) in Nepal. He had also been involved in several projects for HIV/AIDS Prevention, Care and Treatment Programs targeted to IDUs, FSWs and their children. He had presented numerous working papers and delivered seminars on Early Childhood Education and Care, and HIV/AIDS in many countries around the world. He has also featured in several occasions by the Nepal’s social media as an advocate for child rights and issues.

Furthermore, he had been an Advocate of ECD program around the world with the award of “Global Leader for Young Children-2007” by World Forum Foundation (WFF), USA. He was a regular attendee of the conferences organized by WFF since and then 2007. He had got a good exposure and working experiences from the team of WFF. He had a hat of National Representative of Nepal for WFF with great roles and responsibilities which he had been carrying forward successfully.” 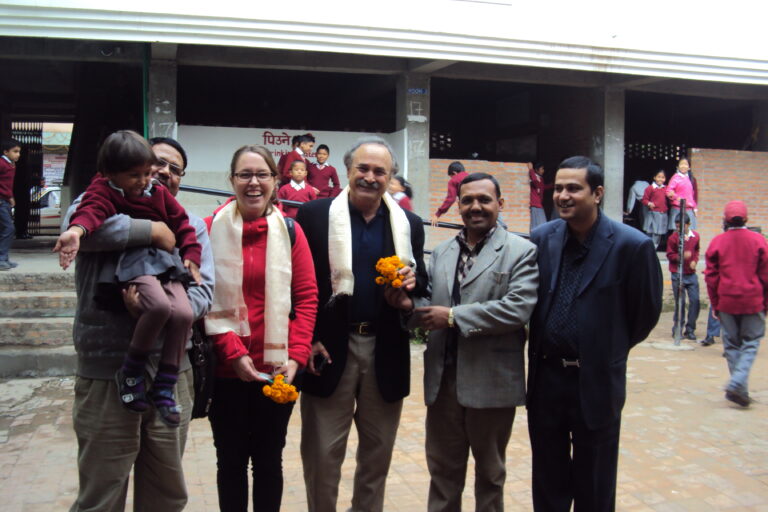 “Dhirendra is one of the most passionate and hard working individuals that I know. His dedication to his early childhood programs in Nepal was unmatched. His monthly reports weren’t just a work update, but they were full of his joy for his work and his love for these students and communities. The first time I met Dhirendra was years ago when he came to visit our schools in Berkeley. What struck me most was that he had the opportunity to sightsee in other areas of California, but instead he chose to spend hours in our various classrooms in order to learn as much as he could. In an increasingly virtual world, Dhirendra’s love of meeting and learning from people in person was such a joy for me to witness. The world has lost a rare soul, and I have lost more than a colleague, I have lost a brother. I know we will all be motivated to carry on his legacy in our work and remember his passion and heart.” 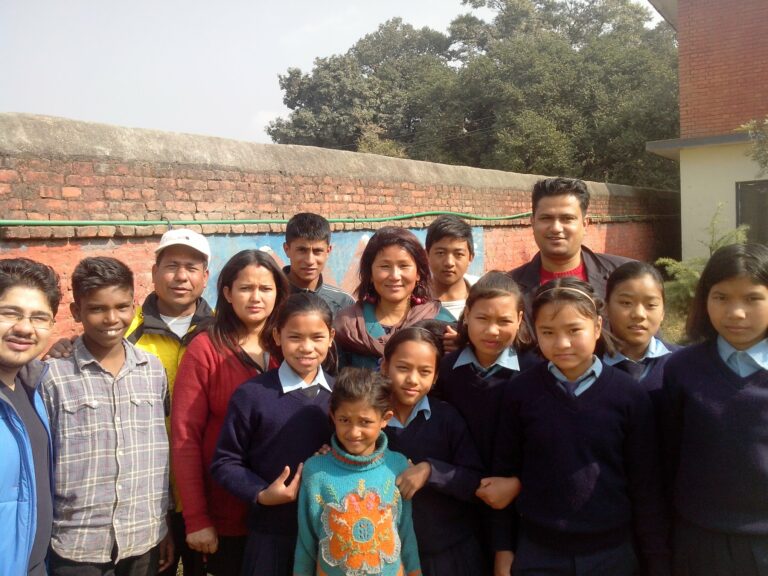 It is so sad that Dhirenda is not with us anymore. We met few times in Global Leaders meetings and I will remember him as a very warm and attentive person deeply involved in children`s problems. I am sending warm condolences to his family and friends.

It is with a sad heart that I read about Dhirendra, a great loss for children and the world. I remember him walking into the Global Leaders meetings, always so positive, always ready to contribute. I will remember his smile, his warmth and his spirit. It was an honor to know him. With affection, Joan Lombardi

Such a loss to our World Forum Community and the world at large. Dhirendra was such a passionate advocate for children and a friend to us all.

I believe our dear friend Dhiraz(Dhiredra) has already passed on himself and his goodwill to the kids.Although he isn’t with us physically, he will forever be with us through the kids that we work for.

The late Lamsal was a very warm,social, intelligent,wise, passionate and contributed enormously and freely to the growth and development of the early childhood years to the global community.May his ideas and memories be a living testimony and permanent empact on our programs.

Thank you for featuring him. The Global World will remember him in the arena of ECD and Child rights.

Dhirendra was a dear friend. We first met in San Juan in 2014 and met several times in different places around the world. As I spoke Nepali with him (as I do with all my Nepali friends), we connected very well and deepened our connection each time we met. He was an honest forthright person, and a wonderful friend. I am saddened at his passing away and will miss him in our gatherings. I would like my friends in Nepal to please convey my sincere condolences to his family in Nepal. He truly was a wonderful human being.

I will always remember Dhirendra walking into the global leaders meetings with a big smile and a warm heart. He was always so positive, always so intent to learn and share. He made an important contribution to children and his spirit lives on in that work.

I is with great sadness that I have learned of this great loss of a friend and colleague. Dhirenda will be sorely missed but he will ever be remembered and his memories cherished forever across the world and in our World Forum Community. May his soul rest in eternal peace.

People who commit their lives to young children and their families have powerful stories to tell and we can find our own hope and inspiration as we listen.  WoFo Global Café is the space where people gather to share their stories.  Stop by for tea and find affirmation and companionship.