According to the United Nations High Commission for Refugees (UNHCR) there were nearly 69 million refugees worldwide in 2018. Of the refugees who were forced to leave their native countries due to persecution, conflict, violence or human rights violations, it is estimated that approximately 30 million of the refugees were under the age of 18.

After the World Forum, Duane Dennis went to Malaysia along with Dr. Lauren and Anne Sivanathan. Check out his story after attending sessions in Macao on the Refugee situation throughout the world and his visit to a refugee program in Kuala Lumpur…

While attending this years’ World Forum I chose to attend sessions which addressed the refugee situation now faced by so many worldwide. In addition, the issue of refugee migration coupled with immigration has become a political as well as a human rights concern throughout the United States, where I reside. In the US, primary attention is given to migration from Central and South America to America’s southern border. Also, Yasmina Vinci, a colleague and friend who also attended the conference, has a deep interest in the international refugee situation gave me the charge of deepening the World Forum’s understanding of and involvement with children who are considered refugees. By no means am I an expert on the topic so my thoughts are a result of preliminary exploration resulting from sessions attended in Macau, the immigration debates in the US, and my visit to a Refugee program in Kuala Lumpur, Malaysia. Part of my interest stems from the work I have done as a leader of the Peace Building Working Team which is the first working team of the World Forum. There is an obvious intersection between children impacted by violence, the theme of the Peace Building Working Team, and the refugee situation now faced by refugees.

Although Dignity for children states it is a school for underprivileged children in Malaysia, the site which I visited in Kuala Lumpur is a holistic program aimed to improve the life of refugees. The vast majority of children at Dignity are the Rohingya children from Myanmar, with a much smaller number from Somalia, Palestine and Syria. Dignity is located in central Kuala Lumpur within a commercial district. All total there are 1700 children in the program. Rebecca Segran, a social worker at the centre guided me through a three-hour tour. Dignity is comprised of an educational component as well as three social enterprise centres along with a mental health unit. The educational program has children from ages 3-18. Dignity uses a traditional Montessori approach in both the lower and higher grades. The child centred approach was appreciated by the students because of the choices they had to contribute to their own learning. In the upper grade’s attention is given to math, science and language arts. Also, the upper grades make use of the social enterprise centres developed by Dignity. The three social enterprise centres are a hair styling salon, woodwork shop and an onsite restaurant. While most of the students receive training through these centres, a small number of students go on to colleges and universities. The goal is to give the students tools needed to become independent and self-sufficient. The beautician and woodwork centres are similar in scope and focus. Students receive hands on experiences with up to date equipment so they can learn and improve on their craft. The beautician school has hair washers and dryers, manicure and pedicure stations, styling instruction inclusive of cutting, coloring, and setting. Similarly, the wood shop has benches with vices, clamps, chisels and saws. The hands-on approach in both centres allows students to learn while at the same time they are taught entrepreneurial skills because in both programs the goods and services are sold. The revenue is funnelled back into the program. So, the young refugees not only learn basic trades which will improve their outcomes, but they also learn basic business skills in marketing and sales.

The restaurant is unique in that it is mainly student run as students are cooks, servers, waiters, cashiers and cleaners. There is however a full-time employee who manages the facility and has experience in restaurant management. The food was simply delicious, a true taste of Malaysia. Alongside of the restaurant is a vegetable garden. The vegetables harvested are used in the restaurant. Green beans, peas, peppers, ginger, basil, thyme, tomatoes and cucumber are just a few of the vegetables and herbs grown in the garden. There is also a chicken coop with chickens supplying fresh eggs to the restaurant. I was astonished with the degree of professionalism and customer service displayed by the students.

Dignity also has a mental health unit. The mental health centre is a forward-thinking service considering the stressors faced by refugee families. A large number of the children come to dignity with numerous problems based on their experiences. Many have witnessed atrocities while in their native countries. Also, the migration process itself is traumatic for the families, especially children. Dignity provides both individual and family therapy for both children and their caretakers. I believe this is one of the significant attributes provided by Dignity. When visiting the mental health centre, the therapist described behaviors of children impacted by an overdose of violence and trauma. Of note was the number of hyper aggressive children, even at very young ages. These children require intensive therapy and supports. Also, the mental health centre is just beginning a program to assist therapist so they can receive relief and support as they assist families and children with their issues. This is a very strategic and compassionate advancement. All too often in the therapeutic relationship no attention is given to the therapist. Dignity is making a bold move in caring for everyone in the therapeutic relationship.

The World Forum in Macau gave me the appetite to dig deeper and learn more and fortunately my learning continued with my introduction to Dignity for Children. It is my belief that Dignity is an oasis in the desert of refugees and their migration. It represents what is good about the human experience and what can be achieved if there is political will paired with caring philanthropy. Malaysia needs to be commended for initially accepting refugees who the country embraced because these people were forced out of their native countries. Then we must applaud the founders and donors of Dignity for Children who believe this service is the moral imperative considering the circumstances. And finally, we can be inspired by the families who may not ever see their homeland again and who daily make life better for their families through their hard work and all the efforts put forth by Dignity for Children. 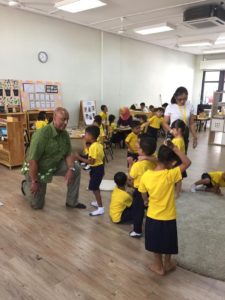 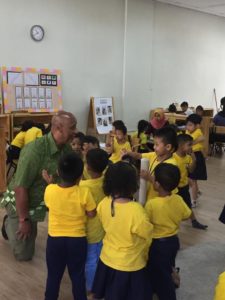